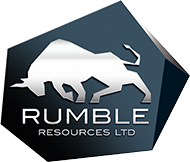 ​Rumble has a significant holding in the Albany Fraser Range Region, Western Australia with over 1126 Square kilometres of highly prospective tenure. 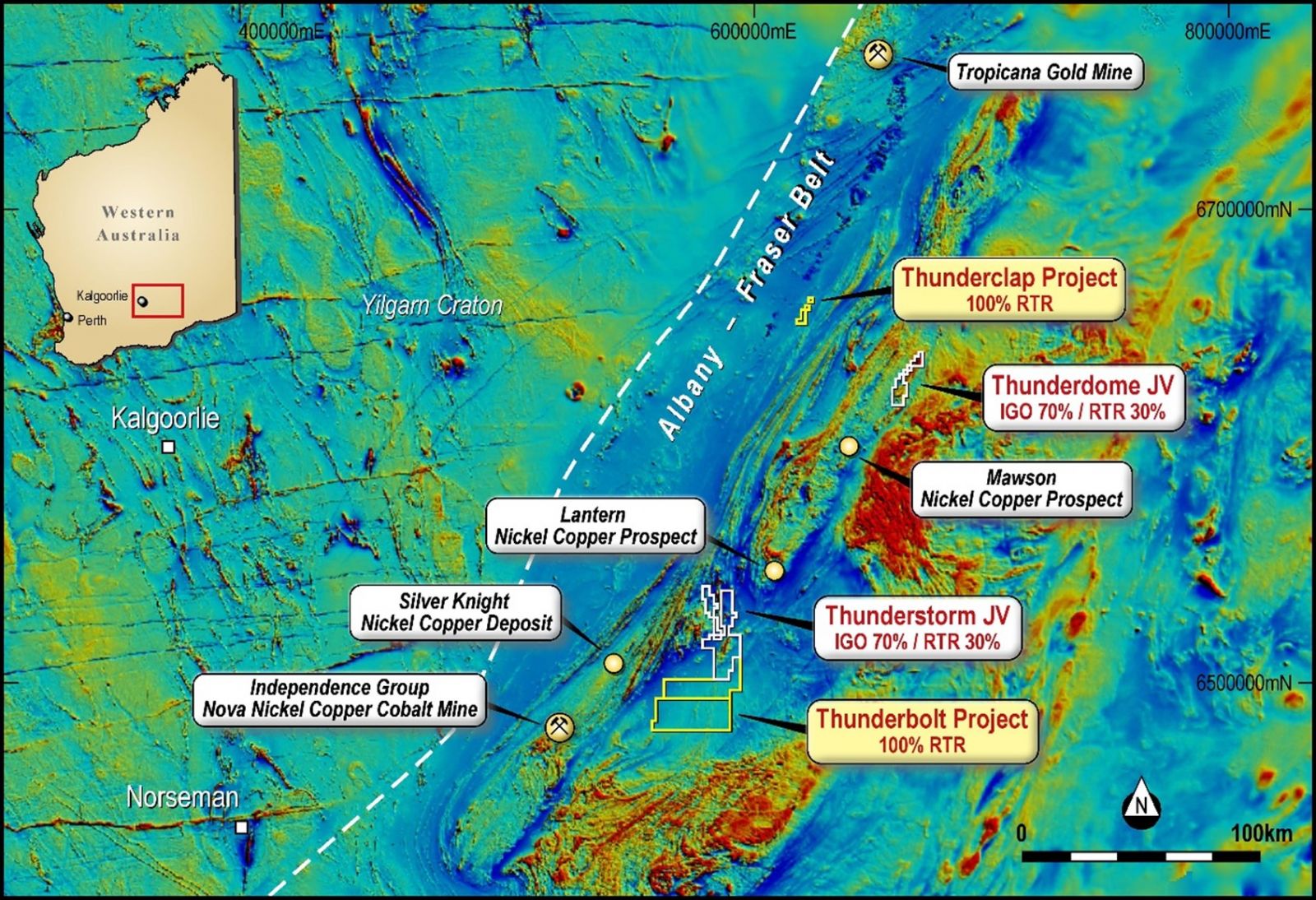 First stage exploration by JV Partner Independence Group (ASX:IGO) utilised the SPECTREM AEM system to map the depth of cover and to highlight conductors under shallow cover along with acquiring magnetics data.

Along with the geophysics, IGO completed a wide spaced air core drilling program 1.5km by 400m pattern over the project delivered exciting results including a new significant shallow high-grade gold intercepts and widespread gold throughout the Thunderstorm JV project which lies within the Albany Fraser Province which is known for its world-class discoveries including the large scale Tropicana gold deposit (see image 1).

2 High-grade gold have been intersected within a palaeo-drainage and into basement rocks.

Some 13 km further along the palaeo-drainage at the Pion Prospect, hole 18AFAC20486 returned: 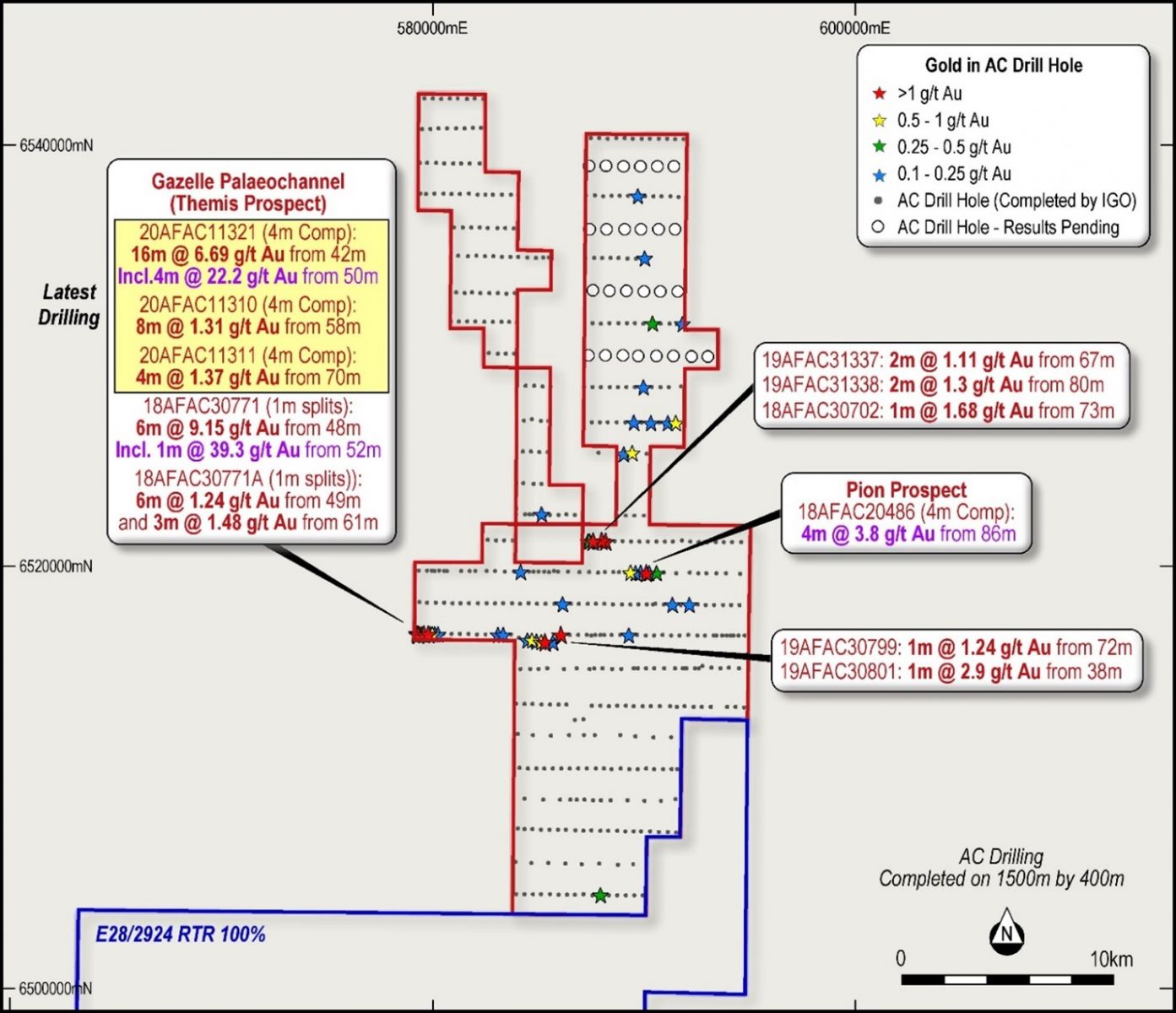 The Thunderbolt Project lies south of and contiguous to the Thunderstorm JV Project.

An airborne magnetic survey completed by Rumble has shown the significant gold mineralising structures from the Thunderstorm Project and IGO owned tenure, which hosts the Torquata and Salubris gold prospects, potentially extend into the Thunderbolt Project

No drilling has been completed within the Thunderbolt Project 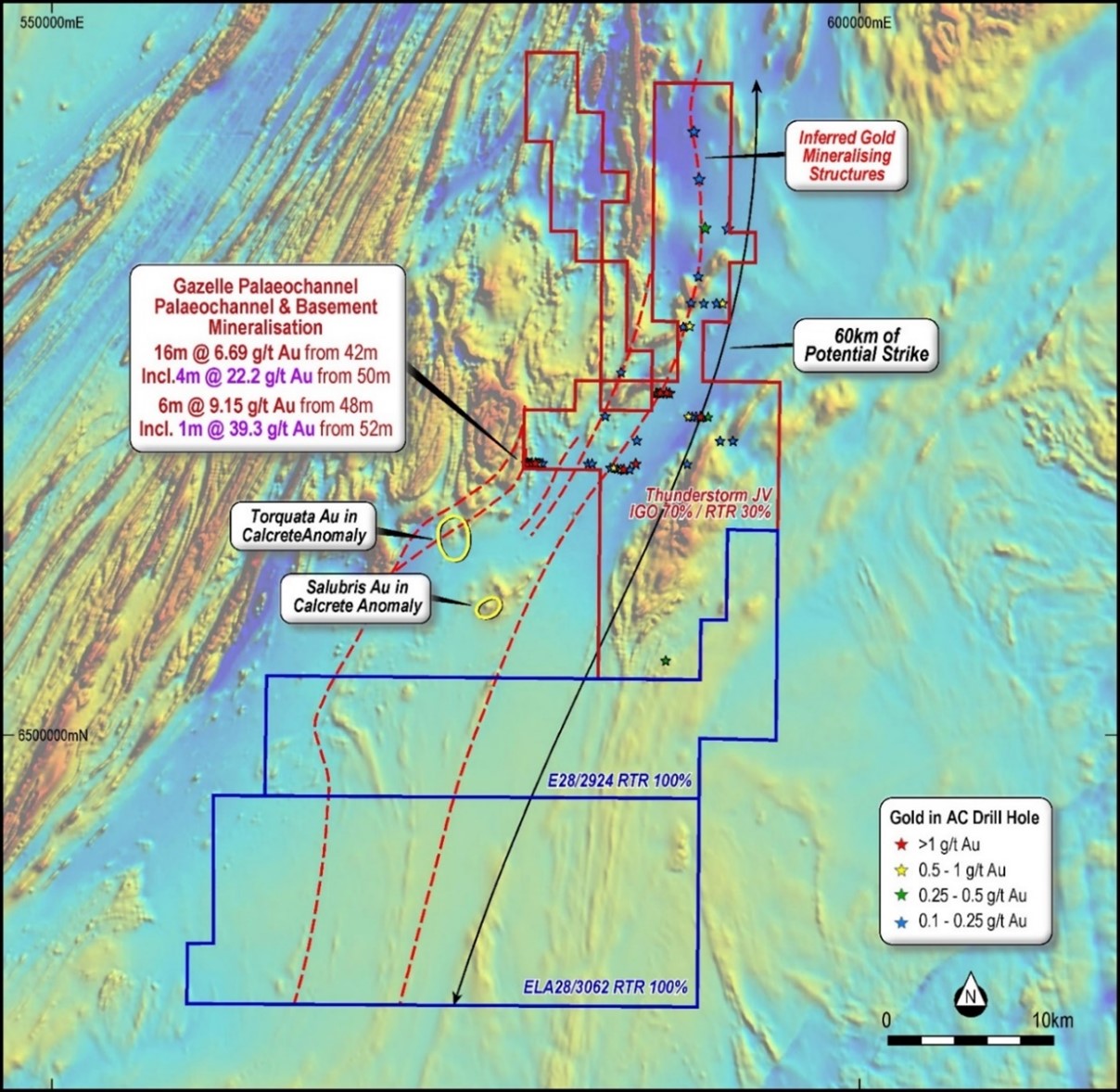 Within the Thunderstorm and Thunderbolt projects, a corridor of gold mineralising structures (>60km strike) has been inferred by Rumble to potentially represent multiple basement-hosted primary gold sources for the widespread gold distribution identified in multiple palaeo-drainage systems. 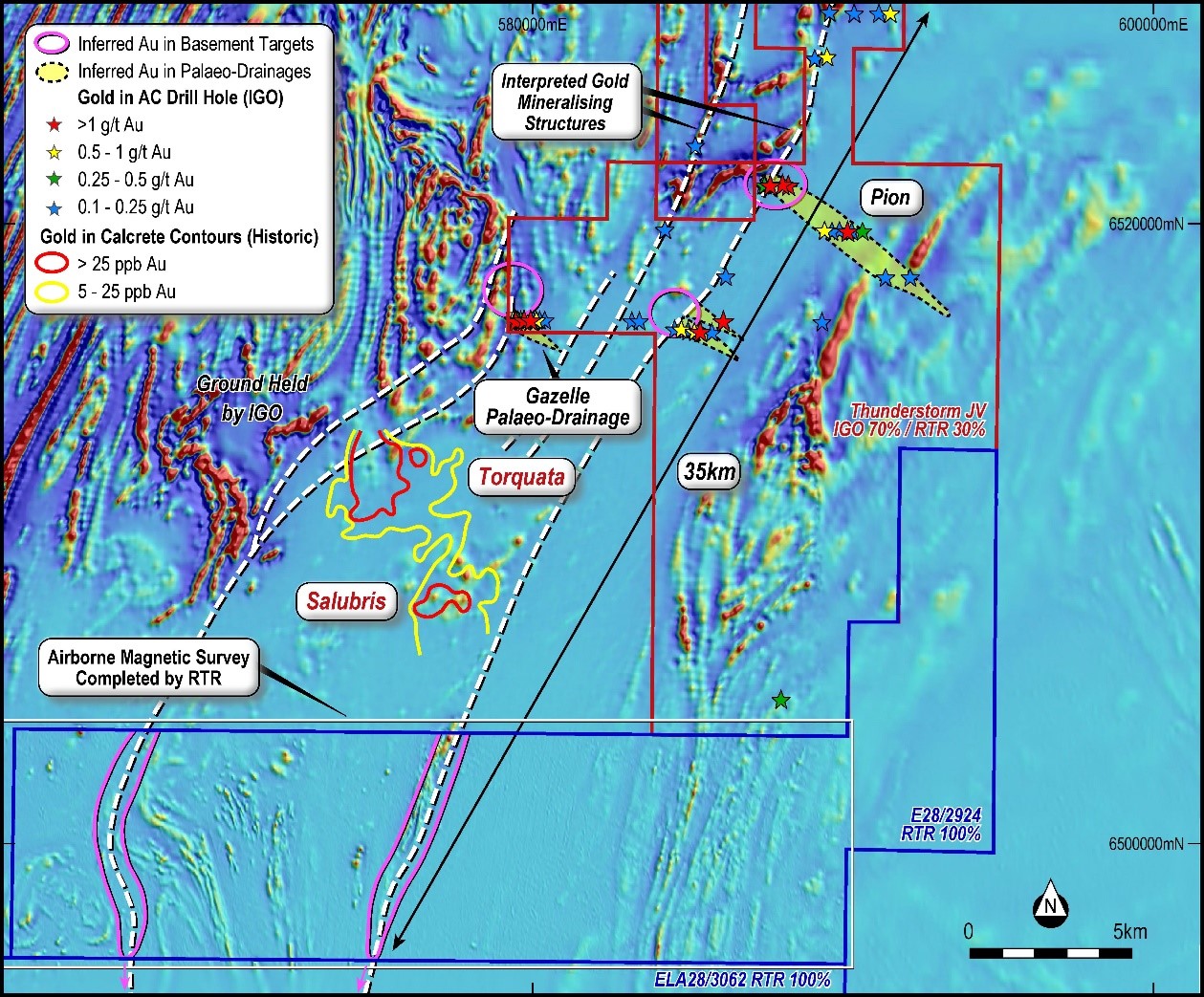 The Thunderdome Project is located on the main Fraser Range gravity ridge associated with dense mafic/ultramafic rocks of the Fraser Complex. It has a large prominent dome feature clearly visible on regional airborne magnetic images. This large dome feature is one of the largest in the Fraser Range and has a fold axis of some 22km. Within this larger target area are also several smaller features which may represent later stage intrusions.

The Thunderdome project is located 30 km north-east along trend of the recent Mawson nickel-copper discovery (refer Image 5) made by Legend Mining. 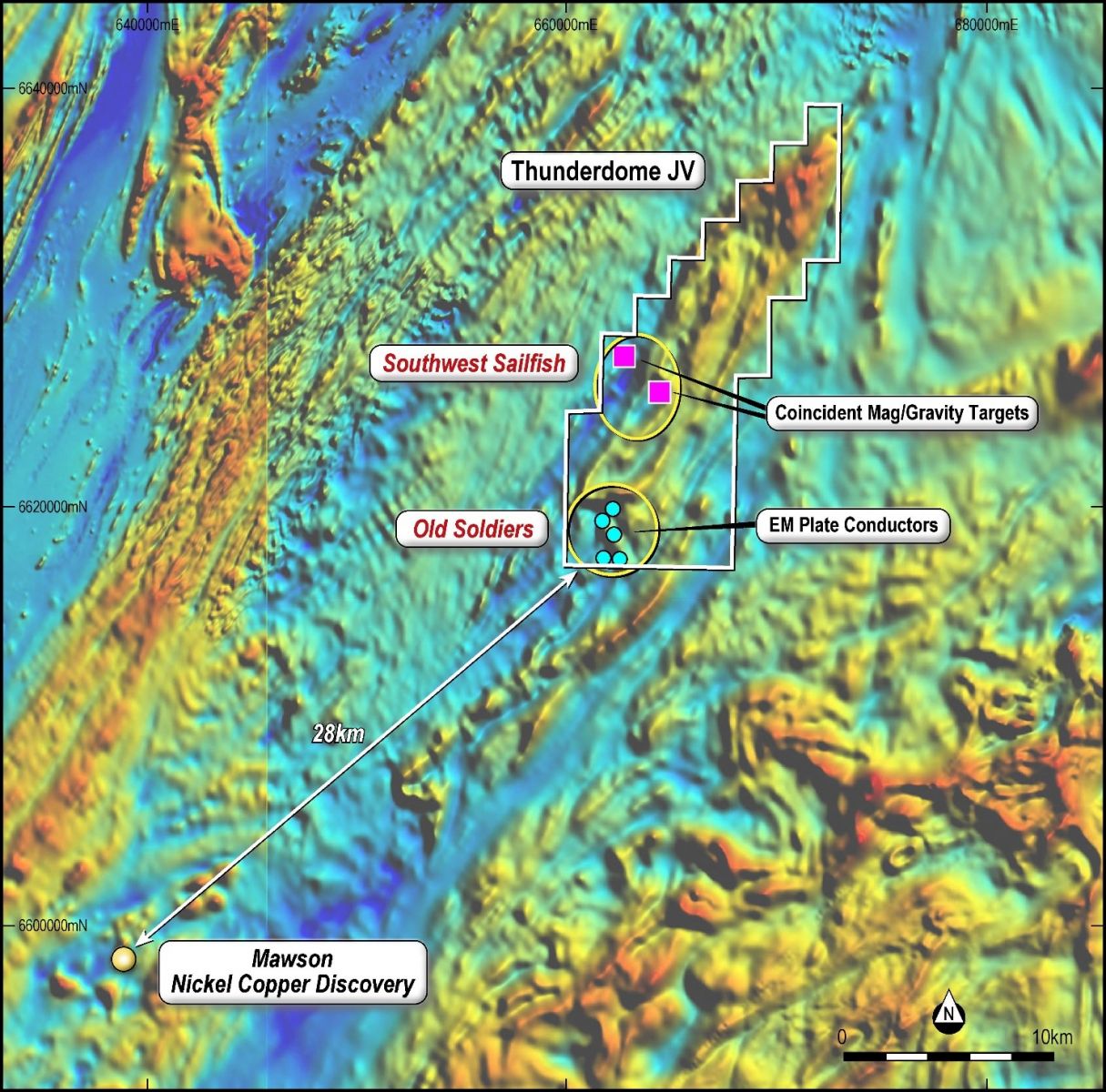